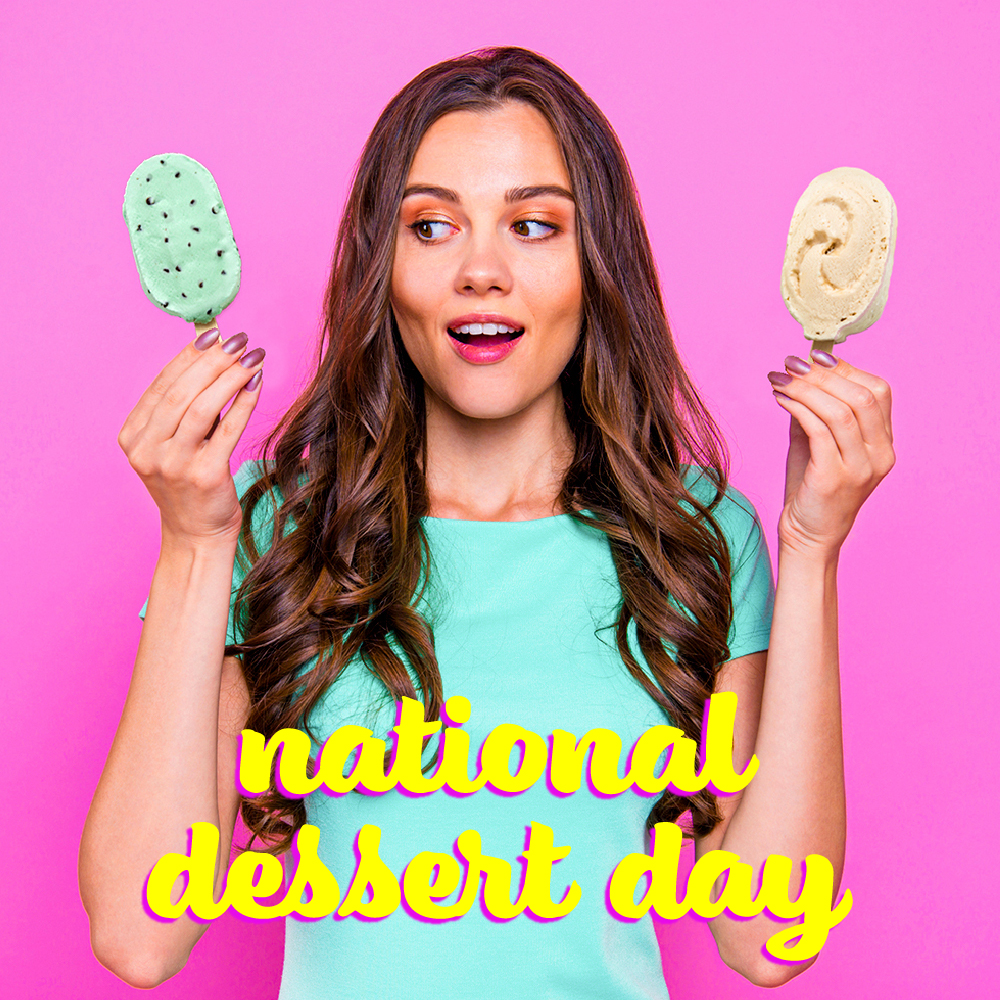 You’ve just finished a delicious homemade meal. It’s one that was packed full of key vitamins and nutrients you know are good for you. It was balanced with low-fat proteins, fresh sauteed vegetables from your garden, and had a myriad of bright colors. It was…perfect.

But something’s absent. You’re not quite satiated. What else could you be missing?

If you’re like many Americans out there, you know the answer to this is easy: Dessert.

Dessert is the grand finale of all meals. It’s the icing on the cake. The cream of the crop. The celebration at the finish line. Ultimately, it’s the portion of your meal that is most anticipated.

Even if you’re not a huge “sweets” fan, desserts are popular across the country, and in many other cultures that span the globe. They can be found almost anywhere you go. Desserts are so popular, that they even earned a national day all to themselves. That’s right, today is National Dessert Day! Bring on the cheat days, guiltless indulgences, and sugar and spice (and everything nice).

This may sound silly, but not everyone knows what dessert is.

It’s sad, but true. Let us enlighten you.

Dessert is the sweet course eaten at the end of a meal. The term “dessert” is used in connection with a varying degree of sweets, each with different textures, flavors, and appearances. Desserts can include, but are not limited to, cakes, tarts, cookies, biscuits, gelatins, pastries, ice creams, pies, puddings, custards, and sweet soups. Fruit is also commonly found in dessert courses because of its naturally occurring sweetness, like those found in our Jolly Llama Pops.

Desserts have been around for thousands of years. Anciently, the desserts people enjoyed typically contained fruits and nuts candied with honey. Of course, the desserts we enjoy today aren’t what they used to be, what with modern technology and culinary experimentations.

The word “dessert” first came about from the French word “desservir” which means “to clear the table.” This term was first used in 1600, in a health education manual entitled Naturall and Artificial Directions for Health, written by William Vaughan, and has stuck around since.

The Evolution of Desserts

Europeans began to manufacture sugar in the Middle Ages, and more sweet desserts became available. Even then sugar was so expensive usually only the wealthy could indulge on special occasions.

The Industrial Revolution in America and Europe caused desserts (and food in general) to be mass-produced, processed, preserved, canned, and packaged. Frozen foods, including desserts, became very popular starting in the 1920s when the refrigerator was invented.

Ending on a Sweet Note

From cupcakes, to ice creams and sorbets, to cookies, pastries, and souffles, desserts are a real treat. And while it’s okay to indulge in these occasionally, it should be noted that consuming too much sugar isn’t healthy.

No need to fear, that’s where your sugar daddy comes in to the rescue– Jolly Llama’s Sorbet and Cream Pops are the perfect anecdote for you. Not only are our products made with real fruit and taste great, they’re lower in sugars and calories, helping you get your sweet fix, all while keeping your health in check. It’s a ‘piece of cake.’ Next time you feel like something’s missing after dinner, reach for one of Jolly Llama’s frozen pops.